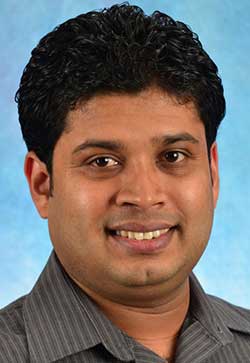 Kumuditha Ratnayake, post-doctoral researcher from the Soper research group at the University of Kansas, received a Tony B. Academic Travel Award to attend the Society for Laboratory Automation and Screening (SLAS) 2018 International Conference & Exhibition, February 3-7, 2018 in San Diego, CA.

Dr. Ratnayake was one of 65 winners from 15 countries to earn an invitation to present their scientific achievements at SLAS2018. Winners were determined by a panel of judges who conducted comprehensive evaluations of student abstract proposals and made selections based on scientific merit. Through the SLAS Tony B. Academic Travel Awards program, each winner receives roundtrip travel, hotel accommodations and full conference registration.

Significant steps have been made in recent years in determining the role and importance of CMMCs in the malignancy of multiple myeloma and potentially using CMMCs to guide clinical decisions for treatments of this disease. CMMC analyses have typically utilized methods such as slide-based immunofluorescence or flow cytometry and because of their limited sensitivity, require the use of CMMCs harvested from bone marrow aspirates making their clinical translation problematic. A highly sensitive microfluidic-based assay as a viable tool for the isolation, quantification, and characterization of CMMCs directly from peripheral blood that could determine disease state, even for asymptomatic myeloma. The microfluidic assay is capable of enumerating CMMCs from the peripheral blood of patients with plasma cell disorders (monoclonal gammopathy of undetermined significance, MGUS, smoldering multiple myeloma, symptomatic multiple myeloma) and perform clinically applicable diagnostics on the captured CMMCs utilizing a novel, automated platform. The integrated diagnostic system consists of an automated robot for reagent delivery and a compact FISH imaging system including specific filter sets and software suitable for FISH analyses. Using this system, prognostic signatures of multiple myeloma have been secured.

The integrated system consists of three modules; CMMC isolation, coulter counter and an imaging unit. In the cell isolation module, CMMCs are isolated using anti-CD138 antibodies and released using a USER enzyme. The released cells then pass through a cell coulter counter to count the number of captured and release cells using resistive pulse sensing. Finally, these cells are injected into the imaging module, where all FISH processing occurs.

For a pilot clinical study using the CMMC isolation module and CD138 as the selection antigen, CMMCs were identified in 78 % of patients with MGUS, all patients with smoldering and symptomatic multiple myeloma and none of the controls. The levels of CMMCs were higher in patients with symptomatic multiple myeloma compared with MGUS and smoldering multiple myeloma (p <0.05). Using our microfluidic procedure, we could reduce the hybridization time from 2 days to ~6 hrs. Also, the FISH reagents required were reduced by 80 % using our on-chip FISH procedure. The imaging system consists of a simple 3-color LED microscope with an automated stage capable of imaging at x, y and z coordinates. Demonstrated FISH imaging device was beneficial to reduce the user errors in imaging and reducing the imaging time per device.”

Kumuditha M. Weerakoon-Ratnayake received his B.S. in Chemistry at the University of Colombo, Sri Lanka in 2008. He moved to USA in 2009 to proceed with his higher studies. He received his PhD in Bioanalytical Chemistry from Louisiana State University in December 2015. During his graduate time he conducted research at both Louisiana State University and The University of North Carolina at Chapel Hill. After receiving his PhD he accepted a postdoctoral position with Prof. Steven Soper to work in a collaboration project with Biofluidica, Inc. To expand his enthusiasm to working in industry with cutting-edge research, he completed a short internship at Becton and Dickinson. After concluding the internship, he returned back to the postdoc position at The University of Kansas with Prof. Soper and currently continuing his research on developing an commercial microfluidic module system for prognosis of CTCs in whole blood.