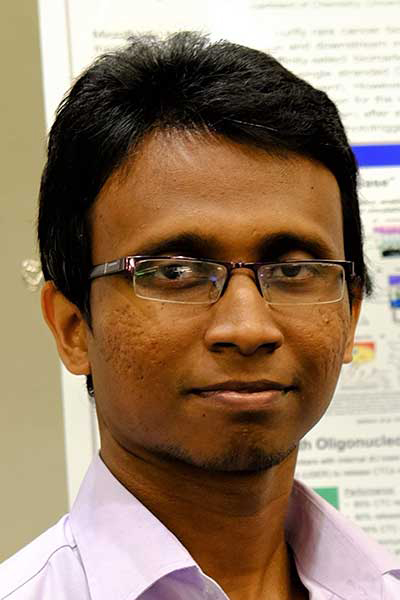 Graduate student Thilanga Pahattuge, from KU’s Soper Research Group, received a $1000 travel award from the Hall Travel Grant to participate in the ACS Fall 2019 National Meeting, August 25-29 in San Diego, CA. Thilanga will be giving a poster presentation titled “Photocleavable linker for the release of rare cancer biomarkers after microfluidic affinity selection,” on Monday, August 26 at 8:00 pm in Exhibit Hall B of the San Diego Convention Center. He will give an oral presentation of the same title on Thursday, August 29 at 9:40 pm in Torrey Pines 2, Marriott Marquis San Diego Marina. Additional authors contributing to Thilanga’s project are Dr. Joshua Matt Jackson and Dr. Steven A. Soper.

The abstract for Thilanga’s poster is:
Liquid biopsy markers, such as circulating tumor cells (CTCs) and extracellular vesicles (EVs), are a good source of information for cancer diagnosis and prognosis and offer the benefit of ease of acquisition requiring a simple blood draw. Typically, these liquid biopsy markers can be selected from blood using an affinity approach in which antibodies or other affinity agents targeting disease-specific antigens are used to enrich the markers. However, affinity enrichment can be challenging because of their relatively low abundance, especially in early stage disease. Microfluidic strategies to “catch” liquid biopsy markers has become popular due to the ability to process clinical samples and recover with high efficiency. Following enrichment, “release” of the isolated liquid biopsy markers from the device’s surface is essential to accommodate various downstream molecular analyses that enables precision medicine. Most of the reported catch and release strategies have low release efficiency and the releasing strategy can perturb the molecular content of the liquid biopsy marker’s cargo. We introduce a heterobifunctional photocleavable linker based on a 7-aminocoumarin photocleavable group to efficiently catch and release liquid biopsy markers enriched using microfluidics that does not damage the molecular cargo of the marker. The central coumarin moiety cleaves from its meta carbon when exposed to visible light (400 – 450 nm) releasing the captured liquid biopsy marker from the device’s surface. Use of visible light minimized physical damage to the marker as well as oxidative DNA/RNA damage. As a demonstration, the photocleavable linker was used to catch and release circulating tumor cells, CTCs; the capture efficiency was 73%, with a release efficiency of 94% in ≤2 min with more than 85% CTC purity. This unprecedented release method was able to keep >92% of the cells viable with a well-maintained overall health to proliferate.