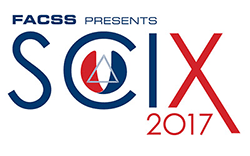 In this presentation, Dr. Soper discussed a novel separation technique for single-molecule analysis, which utilizes capillary electrophoresis (CE) incorporating nanometer-scale columns (width and depth) that are tens of microns in length (nano-CE). Due to scaling-effects, nano-CE offers some unique separation characteristics not associated with micro-scale separations due in part to partial overlap in the electrical double layer (EDL). This results in non-plug like flow and coupled with surface charge effects, can give rise to transverse electromigration. Indeed, free solution of DNA molecules are possible in nano-CE that cannot be realized in miro-CE. The columns are produced in thermoplastics using Nanoimprint Lithography (NIL) from resin stamps and Si masters. The masters are made using a combination of conventional optical lithography (microchannels) and focused ion beam milling (nanochannels). Thermoplastics can serve as viable alternatives to glass and quartz for nanofluidic devices because of their diverse surface chemistry, optical transparency and the ability to be manufactured in a high production mode using NIL. NIL has proven to be successful in patterning structures to sub-10 nm dimensions with the ultimate resolution determined by the minimum feature size associated with the imprinting tool. In fact, Soper's group has made columns as small as 18 nm (width x depth) using NIL. He discussed the electrically driven transport properties of both small (deoxynucleotides monophosphates, dNMPs) and large (DNAs) molecules traveling through thermoplastic nanocolumns. The effects of scale (i.e., cross-sectional area of polymer nanocolumn), electrical double layer overlap producing non-plug-like flow profiles, surface chemistry, surface charge, transverse electromigration, nano-scale surface roughness and electroosmotic flow (EOF) were discussed and the effects of these parameters on separation efficiency for nano-CE were presented. He also discussed the use of nano-CE as an identification technique for single-molecule sequencing of both RNA and DNA molecules.